The Corning Chamber of Commerce was established in 1921 and has been serving the Corning business community for almost 100 years. The Chamber is an organization committed to the ongoing challenge of positive community developments and business success. As you become involved in the Chamber we trust that you will find cost-effective promotional resources, regular and beneficial networking opportunities, a greater sense of connections with your community, and many other tools needed for business success. The mission of the Chamber is to promote responsible business development, tourism and growth in the overall best interest of the Corning area through services and representation of the business community.

A chamber of commerce is a community within itself. It brings its members together to not only benefit the community but also to benefit each other. Through various events, you will meet, network, and connect with a wide array of influential professionals . It's up to you to make the connection, of course, but the opportunities are aplenty. Local chambers tackle both issues and trends taking place in their community as well as offer resources and services to help local businesses succeed. It isn't just a goodwill effort, but an effective strategy.

History of the Corning Chamber of Commerce
By Helen Pitkin, Retired Executive Director

There is a mystery when it comes to the beginning of the Corning Chamber of Commerce.  Newspaper accounts are sketchy.  Articles in the Corning Observer are found from 1913.  The earliest article in 1931 refers to an already organized Chamber.  Records in the Corning City Council Minutes makes a reference to an already formed Chamber in 1910.Early accounts show that the Chamber was active in the water, sewer, and schools bond elections.  I have found that some of the same businessmen that served on the early Chamber Boards were also some of the first trustees for the newly Incorporated City of Corning.

It could be speculated that Warren Woodson the man responsible for colonizing the area really operated the first Chamber of Commerce.  He spent a million dollars in the early 1900’s promoting the area and community to the settlers moving from the east. It was Woodson who thought up the slogan “Corning, The Clean Town” after prohibition was voted in on 1907 to rid the town of its saloons.  The idea was to make Corning more attractive to families coming west.

Although the exact beginning of the Corning Chamber of Commerce is not yet known, one thing is for certain.  It is a pretty fair bet that it has been around since the incorporation of the city in 1907 and continues to grow and prosper now at the turn of the century. 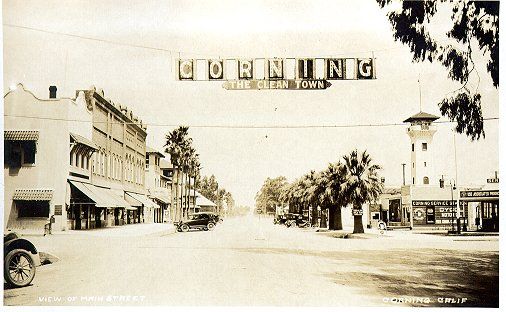 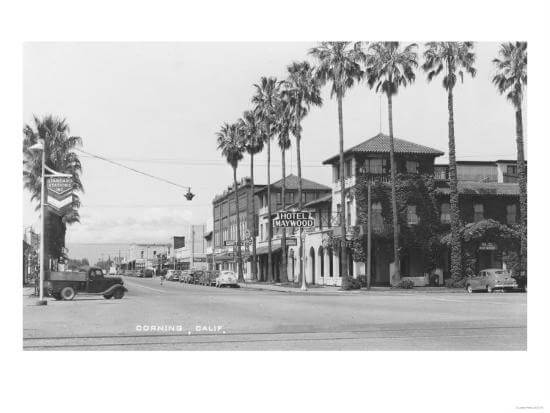 The first inhabitants in this area were the Wintun Indians. About 1769, the Spanish laid claim to the area along with the rest of California and Mexico. But in 1822, Mexico gained its independence, and this land was then considered Mexican Territory. In 1848, Mexico ceded California to the United States, the Gold Rush was under way.

On Sept. 9, 1850, California became a state, and this area became part of Colusi County. Tehama County was formed in 1856. As the West was opening up, the area was settling fast. Settlers got word that there was vacant land in southern Tehama County.

A part of early California history, the California Bear Flag was created at the Moon house just east of Corning during the Bear Flag revolt when California was briefly its own country before joining the Union. It was officially adopted as the state flag on Feb. 3, 1911.

By 1871, the land was all taken by “squatters.” Houses and cabins were going up haphazardly so the area was first called Scatterville by the Tehama Tocsin, an early newspaper published in the City of Tehama.

Charles Rice built a store where Highway 99 West now intersects with Solano Street. Because he disliked the name Scatterville, he called it Farmington. Later, 14 other businesses would join Rice in the area.

Rice applied for a post office permit, and the postal service suggested the name be changed to Riceville.

In 1878, county surveyors were hired to lay out a town. Half the town was laid out on the west of Main Street (Highway 99W). The other half was on the east. The northern boundaries were where Solano Street and Corning Road are now located.

In 1881, the railroad was planning to come through the valley and would not bend the tracks to Riceville. Hoag granted the right of way to the railroad.

In 1882, the depot was built. Because the railroad would not move to the town, the town moved to the railroad. The town was literally picked up and moved 1 mile east.

Andrew Aitkin was the first to make the move. He sold his first goods there to David Wise who would be the first to build in what would later become Corning.

Today, Interstate 5 and Highway 99W run over what was once the town of Riceville.

The name of the town was soon changed to Corning in honor of John Corning, who had been the assistant superintendent of the Central Pacific Railroad.

Residents officially celebrated the birth of their new town on Jan. 1, 1883, at a gala held at Million’s Hotel. Later that year, Sunset Hill Cemetery was created into a cemetery district.

By 1884, Corning had grown large enough in population for the board of supervisors to rename the area the Township of Corning from the former Township of Tehama.

After schools were built in various areas, Hoag donated two acres of land on West Street for the construction of a school which housed 104 students. The Corning Observer was founded in 1884.

In 1891, a man who would become known as the “Father of Corning” or “Daddy Woodson,” Warren N. Woodson took an interest in the area. Woodson, a real estate promoter, purchased 3,100 acres from Hoag at $25 an acre and subdivided it into 10-acre plots in an organized town. Other lands would be added to what would become the Maywood Colony.

Offices were soon established on the East Coast to market Woodson’s land. He would spend more than $500,000 on advertising. It worked, and soon new colonists moved to the area in droves – enough to allow Warren Woodson and business partner Sen. Charles F. Foster to open a lumber yard. By 1893, many of the colonists had grown tired of living on their farms and wanted to move to town, so Woodson and Foster developed the Maywood Addition to Corning consisting of 160 acres of town lots for sale. A public park and town center were planned.

In 1897, mission olives were planted and used primarily for oil. After the olive trees withstood the year’s winter and pests that wreaked havoc on the fruit trees, a new industry was born. The Maywood Colony Canning and Olive Packing Association was formed with olives showing signs of their royal future.

Society in the new town was also emerging with formation of the Maywood Woman’s Club. It was limited in membership to ladies who lived on the east side, an imaginary line which ran parallel to the railroad tracks.

The Maywood Colony Office was opened at the southwest corner of Third and Solano streets across from the railroad.

Tragedy struck in 1898 when on July 7 every business within a two-block area burned to the ground. Also in 1898, the New Era Newspaper began publication.

The three-story, 43-room Hotel Maywood was constructed and a gala celebration was held on April 14, 1899, with more than 1,000 in attendance. Later in the year, a new opera house was built and served as a store, meeting place, basketball court as well as a theatre.

In 1900, Foster and Woodson purchased the remaining 825 lots of the original 1,176 from the Pacific Improvement Co. Woodson, with the help of the Maywood Woman’s Club. They turned Maywood Park into the first municipal auto camp with electricity, restrooms, stoves and picnic tables. Two years later, Foster and Woodson would terminate their partnership.

Fires would destroy the stable at the Maywood Colony office as well as Bill Bailey’s Saloon. On New Year’s Eve, a fire struck the Corning Lumber yard, which was destroyed even against the efforts of a bucket brigade organized by the townspeople. This led to much rebuilding and town improvements, including the addition of street signs and numbered telephone lines.

Corning Lumber Company was rebuilt in 1904, as was the Maywood Colony Office, which went in across the street from the Maywood Hotel. The new facility included the Maywood Tower – the model for the scaled-down Corning Transportation Center of today which is located across the street. The palm trees still remain.

The town’s Masons built a lodge and the Maywood Woman’s Club helped establish and build the first high school.

The olive industry grew even more with the success of the sevillano. The batch had originally been intended to be discarded because they were late in bearing but were saved by the olive packing plant’s manager. These saplings began to produce olives the size of small plums. These would later be crowned the queen of all olives, and Corning became home of the “Queen Olive.”

With the United States in the Great Depression, Corning was fast becoming a saloon town. Even though there was a wide range of churches already established, town leaders feared the worst.

Spurred on by editorials in the Corning Observer and influenced by the ladies of the Maywood Woman’s Club, a move to incorporate the city was initiated.

Also in 1906, the Bank of Corning was opened in the Lirsch House, and in 1907 the Maywood Woman’s Club formed the first public library.

Prohibition came to Corning in 1907 with Ordinance No. 3 which barred the sales, use or possession of any intoxicating liquors in city limits. All saloonkeepers closed except one. The saloonkeeper fought it, citing that there were defects in the city’s incorporation making the ordinance invalid. The jury ended up deadlocked 7-5 favoring acquittal.

The case went to the Tehama County Superior Court and the state appellate court, which agreed with the saloonkeeper.

This resulted in a second incorporation on July 23 with Woodson being elected mayor by a vote of 74 to 62. Woodson began to campaign for Corning to become the “clean town.”

The Carnegie Grant Library was built on the corner of Fourth and Yolo streets at a cost of $1,500 in 1914. In 1930, the Corning Veterans Memorial Building was finished and on Aug. 30, 1935, Rodgers Theatre was dedicated.

On July 7, 1965, a fire at Hotel Maywood destroyed the top two floors. It was later rebuilt into a one-story facility to house the Corning City Hall and police department. The present post office was dedicated on July 29, 1965, and the new Corning Library was dedicated on Dec. 7, 1974.

Corning can boast that it has what is believed to be the oldest uncontrolled airport operating in California and the third oldest in the state.

In 1923, a local paper wrote: “Corning has abandoned the slogan of the clean town,’ henceforth Corning is to be known as the olive town,’ originated by Warren N. Woodson.”

Today Corning has taken its place on the map as “the Olive City.”